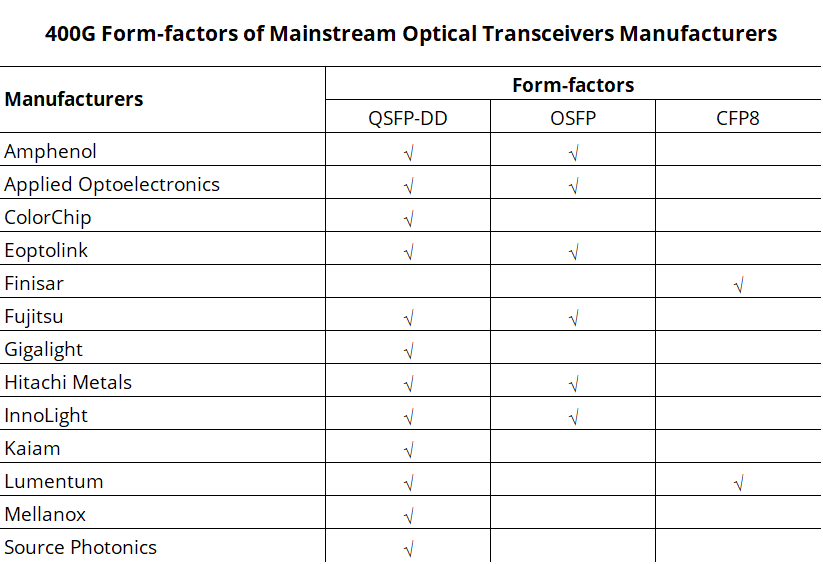 Why do mainstream manufacturers choose the QSFP-DD form-factor? Does this mean that the future 400G optical modules will be based on QSFP-DD? In order to clarify these issues, let us first look at the history of QSFP-DD.

The History of QSFP-DD Form Factor

In summary, from the beginning of 2016 to the end of 2018, the birth of QSFP-DD has matured for nearly three years. During this period, the members of the QSFP-DD MSA group have also increased from the original 13 promoters to the current 14 promoters (3 companies were acquired, so only 11 were actually left) and 52 contributors.

The changes in the promoters of the QSFP-DD MSA group during this period also verified an old saying: the hero of the situation — II-VI acquired the old optical transceiver manufacturer Finisar; Broadcom acquired Brocade; Lumentum acquired Oclaro; Cisco also completed the acquisition of Luxtera recently. After so many acquisitions, let's take a look at the big companies left. There are chip providers such as Broadcom (Avago uses Broadcom as the brand name after the acquisition of Broadcom), equipment vendors such as Cisco and Huawei, device providers such as Lumentum, optical transceiver manufacturers such as Foxconn Interconnect Technology, accessories manufacturers such as Molex and TE Connectivity, and so on, covering the entire communications industry.

Why are so many big companies working together to promote QSFP-DD? Let us find the reasons together now.

A successful form factor must support the entire set of media and transceiver types prevalent in the networking industry. For media this includes passive Direct Attached Copper cables (DAC), Multi-Mode Fibers (MMF) and Single-Mode Fibers (SMF). For transceivers and active copper or active optical cable assemblies, this includes those defined by Ethernet, Fibre Channel, and InfiniBand for 100 Gb/s, 200 Gb/s and 400 Gb/s. In addition, port density must not be compromised from that of current practice. Further, backward compatibility with the popular QSFP form factor is essential for industry adoption.

QSFP-DD, Quad Small Form-factor Pluggable Double-Density, is a new module and cage/connector system similar to current QSFP, but with an additional row of contacts providing for an eight lane electrical interface. The term "Double-Density" refers to the doubling of the number of high-speed electrical interfaces that the module supports compared to the regular QSFP28 module. The connector specification is ready for the new PAM4 electrical modulation format that supports 50Gb/s that provides another doubling of speed resulting is a 4x increased in port speed for the QSFP-DD compared to the QSFP28 module.

The Diagram of QSFP-DD Module and Host Interface

Next, we will analyze the features of QSFP-DD one by one.

The Features and Benefits of QSFP-DD Form Factor

SMT connector and 1xN cage, Cage design optimizations and module case optimizations enable thermal support of at least 12W per module. The QSFP-DD Specification defines power classes up to 14W as well as a >14W class. Due to innovative thermal management techniques used in the module and cage designs, QSFP-DD modules support power levels of at least 12W in a typical system design. The extensive knowledge and experience of system design with QSFP family form factors enables innovative systems solutions that could extend beyond that range. Thermal management features needed for the higher power consumption classes are relaxed for the lower power classes to avoid unnecessary costs.

Before the emergence of QSFP-DD, the most popular interfaces in the networking industry consisted of single (SFP/SFP+) or quad lanes (QSFP+/QSFP28). However, to accommodate expected demand for data bandwidth or channel capacity, eight lane interfaces are being defined in venues such as Ethernet. The currently available form factors that support eight lane interfaces do not have all the desired features or density necessary to support the next generation systems that plan to implement these higher rate interfaces. Thus, the QSFP-DD MSA group extended and defined QSFP-DD based on QSFP (QSFP+/QSFP28).

Systems designed with QSFP-DD modules are backwards compatible, allowing them to support existing QSFP modules and provide flexibility for end users and system designers. Backwards compatibility is critically important to the industry. Since ASICs are designed to support multiple interface rates, it is critically important that the system can take advantage of this. End users can take advantage of the newer ASIC and system products with lower port costs and are able plug in a wide range of currently available QSFP modules to support their desired media and reach without needing to have separate system products. This greatly decreases the risks associated with implementing new equipment. System designers can build common products that support a multiple of pluggable variants while leveraging known technologies and designs. Module designers do not need to port their lower rate designs into new non-backwards compatible form factors lowering their overall costs. The economy of scale achieved due to backwards compatibility make it highly desirable.

The system port densities are identical between QSFP-DD and QSFP28 module specifications. However, since each QSFP-DD port can accommodate 8 lanes instead of 4, QSFP-DD doubles the number of ASIC ports it supports for existing interfaces such as CAUI-4.

The mechanical interface for QSFP-DD on the host board is slightly deeper than for QSFP28 to accommodate the extra row of contacts. The height and width are identical to the QSFP form factor enabling system designers to achieve identical system port count densities for QSFP28 or QSFP-DD based designs. You can plug any current QSFP or QSFP28 module into the QSFP-DD 1x1 or the 2x1 cage/connector combinations.

In summary, QSFP-DD is a little longer than QSFP+/QSFP28 but the port density is the same, and the bandwidth is increased to 10 times or 4 times of the latter, and it is backwards compatible, which means customers can skip the QSFP system and directly deploys the QSFP-DD system, which greatly reduces the equipment costs.

At the beginning of this article, we mentioned that some optical transceiver manufacturers have also introduced 400G optical modules with OSFP and CFP8 form-factors. Let's compare QSFP-DD and OSFP, QSFP-DD and CFP8 to see how they differ. 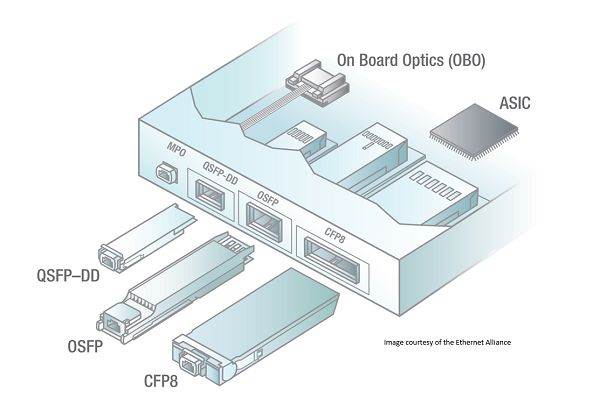 First, let's take a look at OSFP first. Not long ago (January 16, 2019), OSFP MSA released version 2.0. According to its description, the OSFP is a new pluggable form factor with eight high speed electrical lanes that will initially support 400Gb/s (8x50G). It is slightly wider and deeper than the QSFP but it still supports 36 OSFP ports per 1U front panel, enabling 14.4Tb/s per 1U.

Tips: In the latest release of OSFP MSA, OSFP already supports 800Gb/s, which may be the reason why OSFP is also one of the popular 400G form-factors.

In summary, QSFP-DD is mainly used to apply 400G networks that are currently being deployed (and 200G over 100G to 400G), while OSFP is more likely to be prepared for future 800G networks. Therefore, combined with the status quo, QSFP-DD is more suitable as a form-factor of 400G optical transceivers.

The CFP series started from CFP, went to CFP2, then to CFP4, and finally to CFP8, which is also a long-established form-factor series. Compared to the QSFP series, the CFP series seems to have been less popular, for obvious reasons — large size and high power consumption. The first two companies that promoted the development of CFP MSA (Finisar and Oclaro) have also been acquired, and we seem to feel the end of CFP.

Let's take a look at CFP8. The CFP8 hardware specification was officially released by the CFP MSA on March 17, 2017, in the same period as the 2.0 version of the QSFP-DD MSA was released. Comparing the two form-factors, we seem to have foreseen the decline of CFP8.

In summary, QSFP-DD seems to be a better choice than CFP8, regardless of any aspect.

By analyzing the features of QSFP-DD and comparing it to other 400G optical module form-factors, we found that QSFP-DD has unparalleled advantages in 400G applications such as data center interconnects. It is expected that when the world's leading hyperscale data centers start to deploy 400G, QSFP-DD will become the mainstream form-factor of 400G optical modules.

Previous :The Evolution Path of Next Generati... Next :50G PAM4-based Optical Transceiver...