The "fifth-generation mobile communication" is called 5G for short. According to the timetable of the 3GPP organization, the R14 standard studies the 5G system framework and key technologies; the R15 standard is used to meet the 5G requirements of some scenes and opens the commercial process; the R16 standard will complete all the standardization work. R14 and R15 have been completed in March 2017 and June 2018 respectively, while R16 is expected to be completed in December 2019. And the final 5G complete standard will be submitted to the International Telecommunication Union (ITU) in early 2020.

According to 3GPP planning, 5G standards are pided into two types: NSA (non-standalone) and SA (standalone). Among them, the network mode of 5G NSA needs to use 4G base station and 4G core network, and 4G as the anchorage of the control surface, to meet the needs of the radical operators to make use of the existing LTE network resources to realize the rapid deployment of 5G NR (New Ratio).

In June 14, 2018, 3GPP held a plenary meeting in the United States to formally approve the freezing of 5G NR SA function. The 5G NR NSA standard was frozen in December 2017. At this stage, the full-featured full version 5G standard was formally introduced.

The main features of the 5G network include large bandwidth (up to 1Gb/s), low delay (1ns) and mass connection (connection density 106/km2), which provide new requirements for the bandwidth, capacity, delay and networking flexibility of the load-bearing network. The baseband signal of the 5G base station is transmitted digitally, using the eCPRI protocol interface (typical rate 25.16Gb/s). Considering the common stations with 4G, the CPRI option10 rate (24.33Gb/s) needs to be compatible.

5G is coming, and 5G optical network has tens of millions of demands for optical devices.

Optical communication devices are the core components of optical transmission network, bearing the functions of key network physical layer, such as photoelectric conversion, wavelength multiplexing and multiplexing, and distribution of optical power. Compared with the current 3G/4G network, the biggest change of 5G in wireless load-bearing network is the fronthaul and middlehaul. The 5G fronthaul refers to the connection between base station (AAU) and DU (Distribute Unit, dealing with physical layer protocols and real-time services), while 5G middlehaul is the connection between DU and CU (Centralized Unit, dealing with non real-time protocols and services).

The wireless base station is usually installed in the communication tower or the roof of the building. So the optical devices used in the fronthaul and middlehaul need to meet the use of outdoor scenes. The most important thing is that the operating temperature range of the devices needs to meet the requirements of the industrial grade, that is, from -40℃ to 85℃. Another indoor scene, by the way, is generally a commercial grade temperature requirement, 0℃ to 70℃.

In the fronthaul scenario, most of the transmission distance is below 10km, of which less than 5km accounts for about 80%, and 5km to 10km accounts for 20%. Of course, there will be a gap between the theoretical value and the actual application of the current network. And, there will be a problem that the attenuation of the link will increase as fiber aging and the distance of the coverage area might be at the critical value, so the transmission distance above 10km, such as 20km, will still be needed. In the middlehaul scenario, the transmission distance is between 10 and 40km, and there are two operating temperature requirements for industrial and commercial grades. For 5G fronthaul and middlehaul applications, Gigalight has launched (or will launch) a series of industrial-grade optical transceivers, including 25G BiDi/CWDM/DWDM/Tunable SFP28 modules for 10km/20km applications in the 5G fronthaul network, and 100GBASE-LR4/4WDM-40 QSFP28 modules along with 200G QSFP56 modules used for 10km/40km applications in 5G middlehaul (and backhaul) network. At the same time, we also offer industrial-grade passive optical components, such as 5G OMUX, CCWDM, and AAWG (will be released after the maturity of industrial-grade chips).

Figure 1. The data rates and distances of 5G fronthaul and middlehaul

The function of optical transceiver is photoelectric conversion, using optical fiber as the transmission medium. That means the largest investment in the optical network is always the optical fiber resources, so the first thing to consider when selecting equipment and devices is how to save optical fiber. In view of the different scenes of 5G fronthaul, there are three options (25G SFP28 transceivers) to choose from now.

First, in the scene where optical fiber resources are rich, the scheme of optical fiber direct connection, also called One Fiber One Cell, can be deployed with 25G BiDi SFP28 optical transceivers for 10km/20km transmission. In general, there are three cells in one base station. So, the BiDi scheme only needs three optical fibers to meet the fronthaul traffic of one base station, and is conducive to the high precision synchronization of the clock. Among them, the downstream wavelength may be 1310nm or 1330nm, which is uncertain at the moment.

Second, in the scene where optical fiber resources are scarce, the WDM scheme of multiplexing all service wavelengths of a base station to a single fiber or a pair of optical fibers to save optical fiber resources, also called One Fiber One Site (Base-station), can be deployed. A lot of color optical transceivers are needed in the WDM scheme, which will cause inconvenience to installation, spare parts and maintenance. However, the tunable transceivers can be used to solve this problem. So, this scene mainly uses 25G CWDM/DWDM/tunable SFP28 optical transceivers (O-band or C-band), as well as industrial-grade passive optical components such as 5G OMUX and CCWDM modules.

Of course, the more efficient way is to sink the WDM devices directly to the base station and DU, that is, the active WDM scheme, which can be compatible with the current network 2G/3G/4G service, and can achieve more L3 layer business management and optimization functions. However, this scheme will increase the CAPEX.

Third, in the scene where backbone optical fiber resources are destitute, the passive WDM scheme with point to multipoint (P2MP) converging the traffic of multiple base stations to one DU, also called One Fiber N Sites (Base-station), can be deployed. For example, the commonly used 40 channel AAWG DWDM Mux/Demux can cover 6 base stations (each base station has 3 sectors, a total of 18 AAUs, 20 channels for upstream and 20 channels for downstream). This topology conforms to the PON based optical passive network and maximizes the utilization of the existing ODN networks.

At present, there is only commercial-grade AWG that is mature, with an operating temperature range from 0℃ to 75℃. In future WDM-PON and even 5G fronthaul solutions, the operating temperature range of AWG needs to be further upgraded to industrial-grade -40℃ to 85℃, leading more demanding requirements for thermal and athermal packaging, and the requirement for chip-grade athermal AWG is also further improved. Under the condition that the industrial-grade AWG is not mature, the installation environment is inconvenient to meet the commercial-grade temperature, but the optical power budget of the link can be met, we can consider using the PLC splitters (which can fully meet the requirements of the industrial-grade temperature at present). 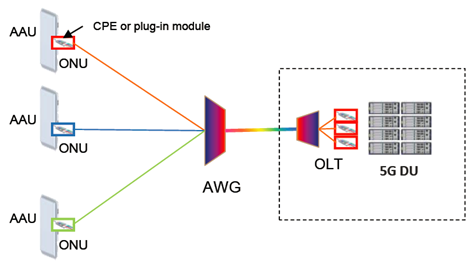 5G is a key milestone in the history of optical communication. For 5G optical networks, there is a huge market with so many challenges. Gigalight will keep providing customers with high-speed optical interconnection products with innovative designs and leading solutions.