As the large-scale deployment of 40Gb/s is carried out, many new 100G/s code modulation formats have emerged in the industry. For various transmission code patterns with different features, based on the comprehensive consideration on parameters of other system design, comprehensive selections are made from perspectives of transmission distance, channel spacing, compatibility with 40Gb/s and 10Gb/s systems, costs of optical transceiver and transmission performance in the industry.

With the advancements of high-speed Digital Signal Processing (DSP) and Analog to Digital Conversion (ADC), coherent optical communication has become a research focus. The combination of coherent detection with DSP technology can make it to carry out carrier phase synchronization and polarization tracking in the electrical field, eliminating the two major obstacles of traditional coherent receiving. In addition, DSP is simple in structure of coherent receiving, with transparency in hardware, available to compensate various transmission losses in the electrical field, to simplify transmission link, to reduce transmission cost, as well as to support multi-ary modulation format and polarization multiplexing so as to realize high spectrum efficiency. After the research and development on the 100Gb/s module in the industry for one or two years, 100G/s coherent PM-QPSK is becoming the main option in the industry.

On the receiving end, different from the intensity modulation(direct detection system), the coherent optic fiber communication system adds the Local Oscillation(LO)light source that the heterodyne or homodyne receiving needs. The optical wave transmitted out by the light source and modulated optical wave take optoelectronic mixing under the condition of wavefront matching and the polarization matching. Slight change on optical frequency of the local oscillator can change the selected channel, so the requirements for line width of local oscillator are high. The field intensity of signal optical wave output after mixing is proportional to the square of the sum of LO optical wave's field intensity, from which the difference-frequency signal between LO optical wave and signal optical wave can be selected out. On account that the change rule of the difference-frequency signal is same as that of signal optical wave, unlike direct detection wave mode in which the detection current only reflects the intensity of the light wave. Therefore, various modulation modes, such as amplitude, frequency, phase and polarization, can be realized.

In the coherent detection method of receiver in Figure 2, due to the detection on the signal of polarization multiplexing, the received signal is decomposed into two orthogonal signals via a PBS (Polarization Beam Splitter); each orthogonal signal is mixed with a LO light source, and the control accuracy of LO light source's carrier frequency is at hundreds of KHz. After mixing, 4 optical signals with polarization and phase orthogonality are received, respectively detected by PIN. After electrical amplification and filtering, they will be converted into 4 channels of digital electrical signals via the A/D circuit. Digital electrical signal realizes these functions by the way of Digital Signal Processing (DSP) chip digital equalization, such as timing recovery, signal recovery, polarization and PMD tracking, and dispersion compensation. 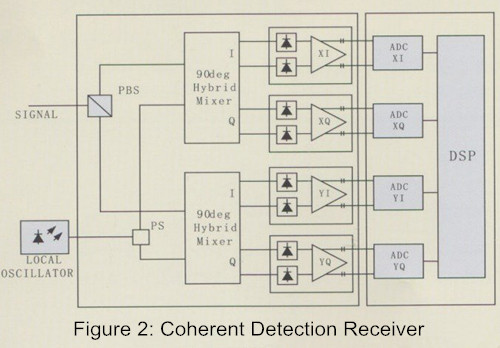 One of the most important advantages of coherent optical communication is coherent detection, which improves the sensitivity of the receiver. In coherent optical communication system, the output photocurrent after coherent mixing is proportional to the product between optical power of signal and that of the LO. Under the same conditions, the sensitivity of coherent receiver is higher 18dB than that of common receiver, which can reach the high performance close to the limitation of shot noise. Simultaneously, the transmission distance without relay of the optical signal can be extended.

Another main advantage of the coherent optical communication is that the selectivity of receiver can be improved. In direct detection, the receiving band is relatively large. To suppress noise interference, the narrow band filter is usually set in front of the detector, but the frequency band is still very wide. In the process of coherent heterodyne detection, what is detected is mixing light of the signal light and the LO light. Therefore, only noises in the medium-frequency band can enter into the system, while other noises are filtered by microwave and medium-frequency amplifier with narrow bandwidth. It can be seen that heterodyne detection has good filtering performance, which will play a significant role in the application of coherent optical communication. In addition, due to the good wavelength selectivity of coherent detection, the coherent receiver can greatly reduce the frequency interval in the frequency pision multiplexing system so as to replace the large frequency interval of the traditional optical multiplexing technology, which is with the potential advantage of realizing higher transmission rate by frequency pision multiplexing.

If the transmission function of the medium-frequency filter in the coherent optical communication of heterodyne detection is just contrary to that of the optical fiber, the effect of the optic fiber dispersion on the system can be reduced.

In the coherent optical communication system, the requirements for signal light source and LO light source are relatively high. It requires narrow spectral line and frequency’s high stability. The line width of light source will decide the minimum error code rate that the system can reach. In the meantime, the frequency of the semiconductor laser is very sensitive to the changes of working temperature and the injection current(the variation is generally at dozens of GHz/℃ and dozens of GHz/mA). Therefore, except to keep injected current and temperature stable, the measures are also taken to keep optical frequency stable.

The receiving techs of coherent optical communication include two parts: one is the optical receiving tech; another one is the demodulation tech with various formats after intermediate frequency.

The Balanced Receiving Method: in the FSK system, it is unavoidable to produce extra noises from amplitude modulation in the modulation process of the semiconductor laser, and the noise can be reduced by using the balanced receiving method. The main concept of the balance method is that after the optical signal enters from the optic fiber, the local-oscillation light is controlled by polarization to ensure that it is adapted to the polarization state of the signal. The local-oscillation light and the signal light, passing the direction combiner at the same time, are pided into two paths, respectively input into two identical PIN photodetectors. After that, what the two optoelectronic detectors output is envelope signal with equal amplitude and inverse phase. After these two signals are synthesized, frequency-modulated signal is increased by one time, while the noises from parasitic amplitude modulation offset with each other to meet the requirements of eliminating effects from amplitude modulation noises.

In the process of the direct modulation on a certain parameter of a semiconductor laser's optical carrier, the parasitic oscillation of other parameters will always be incidental. For example, the ASK direct modulation is with the change of the phase, and the modulation depth will also be limited. In addition, the problems will also appear such as unstable frequency and late oscillation. Therefore, in coherent optical communication system, except that FSK can adopt direct injection current to operate frequency modulation, and others adopt external optical modulation.

In recent years, a great progress has been made in optical devices. Thereinto, these have been greatly improved, such as the output power, line width, stability and noise of the laser, as well as the bandwidth of the photodetector, the power capacity and the common-mode rejection ratio rate. Meanwhile, the performance of microwave electronic devices has been also greatly improved. These advancements make the commercialization of coherent optical communication system possible.